Bushnell Golf is the market leader in rangefinders. The Bushnell Tour V5 laser rangefinder is one of the top options on the market, providing the distances and readings you need to improve your game. It’s an upgrade from the Pro XE, Bushnell’s staple rangefinder. Recently, I was able to get my hands on the V5 and put it to the test during a few rounds.

Is the Bushnell Tour V5 really all that it’s made out to be? That’s what were here to find out.

GPS devices and rangefinders have become standard equipment in most golfer’s bags. Knowing precise distances to the pin or target area is table-stakes in today’s game. The days of relying on sprinkler heads for yardages are something from the past. Some golf courses don’t even have the milestone distances like 200, 150, or 100-yard markers. A lot of times, you’re forced to rely on an app or even just your sight to try and figure out exactly how far you are. That’s why having a rangefinder can make such a difference in your game. Especially if you happen to play courses that aren’t marked well, a rangefinder can be a lifesaver.

What sets the Tour V5 apart from the previous Bushnell rangefinders is the ability to lock into your target and be confident that you’re getting an accurate reading. In the past, previous versions would read your distance and provide you with a jolt when it locked into the area that you wanted to shoot at, whether it was a flag or a tree if you’re laying up or whatnot.

But now, the Tour V5 will give you a distance reading, and the jolt is accompanied by a red ring around the optic screen, further confirming the proper distance. You’ll see it when you look through the lens, and the number will come up to show you just how far you are away from the object. This is a game-changer, not only because it gives you more illumination to see the number, but because it guarantees you that this is, in fact, the distance that it’s shooting.

You can use the Tour V5 rangefinder between 5 and 1,300 yards and shoot a flag up to 400 yards away. The consistency of the readings you get is really impressive, and it makes attacking a course much easier.

I would press and hold the easy-to-use button at the top to get a reading and then press it again until I felt the jolt and saw the red ring. After playing with this for a few holes, I definitely saw that it gave correct readings because my club selections were near where the distances were when I hit the shot correctly. You can also change the distance readings from yards to meters with a press of the side button.

I played two rounds while riding and one while walking with the Tour V5. One of the best parts of using this while riding is that it has a built-in magnet on one of the sides. This allowed me to stick it to the side of the cart and grab it easily when I would get out of the cart to look at my ball. The ability to grab it off the metal pole on the front of the cart and then stick it back there when I was done with the reading made it that much simpler to use. At the end of the first round, I had to run from my car to grab it off the cart again as I forgot it, so, PRO TIP: don’t forgot it after you round!

The Tour V5 is the Perfect Size

The Bushnell Tour V5 easily fits in your hand, as it measures 4.5” x 1.5” x 3” and weighs eight ounces. You won’t have any trouble holding it with one hand, but you can use two hands to steady yourself as you’re getting a reading. The case is really impressive, as it provides a strong home for the rangefinder, so you can toss it in your bag to keep it safe if you have it in a pocket with balls or other items.

There is also a clip on the case that lets you clip it to your golf bag as well. During the round that I walked, I had it in my bag for a while, and then I kept it in my back pocket, and it fitted easily and wasn’t bothersome at all. It’s easy to tote in your hand, pocket, on, or inside a golf cart.

It couldn’t be easier to use the Tour V5, as all you need to do is point it at a target and press and hold the button top. The magnification is 6x, so you’ll get a clear look at something extremely far away or even close up, like in the instances that you’re targeting something other than the pin.

If you are a bit out of focus, you can adjust the lens where your eye is to get a clearer picture. Picking it up and putting it to your eye shows you the point that you want to shoot at and nothing else. It is a clear screen to read without other numbers on it, so you’ll be getting the distance you want to use for your upcoming shot.

The manual says that once the battery is weakening, the display won’t show up, so that is a sign that you need to replace the battery. You also don’t have to clear the previous reading, as shooting your next target will do so, making it much simpler to pick up, use, and put down.

Be confident you’re locked onto the pin, thanks to the flashing red ring and vibrating pulses. The magnetic cart mount lets you store it easily in between shots. 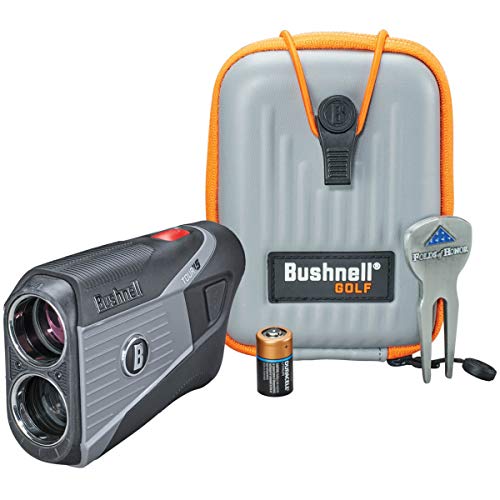 An upgraded version of the Tour V5 called the Tour V5 Shift (link to Amazon) provides slope compensated distances. Slope mode distances are adjusted for elevation. There is a button on the side of the V5 Shift that allows you to turn slope mode on or off.

Slope mode is not allowed in tournament play, so you can toggle it on and off depending on how serious a game you’re playing in. The slope algorithm is improved and shows you the slope reading when you shoot a distance. If you want to account for slope to adjust for elevation (and take the guess-work out), the V5 Shift is a solid choice.

Other Thoughts on the Tour V5

The Tour V5 is not waterproof or metal like some other Bushnell options, so you will have to worry about it in the rain. Make sure to keep it off the pole and inside the cart in bad weather. The Tour V5 includes a divot tool and the case that is a nice throw-in from Bushnell.

You can use it as soon as you take it out of the box and don’t have to do anything to set it up other than potentially adjusting your focus to better fit your preferred settings. You’ll quickly find out the best place to keep it as you’re playing a round, especially if you’re riding or walking. I played two of the three rounds without many yardage markers on the course, so I used it a lot and found it very accessible.

Wrapping it Up and Heading to the Clubhouse

The Bushnell Tour V5 Rangefinder is an extremely easy rangefinder to use during your round. The PinSeeker with Visual Jolt technology confirms your readings and alerts you that this is the distance that you’re shooting. I found that it was correct almost every time, and the only time I questioned it was if my hand moved as I was shooting it.

It was extremely accurate, which adds so much confidence when you’re using a device like this. As long as you’re able to strike your shots well (more often than not), the V5 will come in handy and pay for itself as your scores drop. This is one of the most popular rangefinder companies on the market, and they’ve done it again with this rangefinder. While it is pricey, it is well worth the cost, especially for someone like me who plays many public courses without any yardage markers. It’s one I’m happily going to use all of the time when I’m out on the course.

You can pick up the Tour V5 on Amazon here.

Joe's been playing golf for 25 years, starting as a junior golfer in his early teens. He loves getting out on the links with his dad and friends -- whether an early weekend foursome or his weekday, afternoon league.