If you’re a Mizuno fan, you likely think Mizuno makes some of the best irons on the market. And it’s hard to argue against that statement.

Mizuno makes some amazing golf irons and has for a long time. The best Mizuno irons suit a wide range of players and abilities.

The company is known for making beautiful, sleek irons. Also, Mizuno irons have a phenomenal feel, especially when you catch a shot out of the sweet spot.

These are the best Mizuno irons in 2022.

Made at Mizuno's iconic facility in Hiroshima, Japan, these irons are Grain Flow Forged. You can expect a beautiful feel and instant feedback on impact. 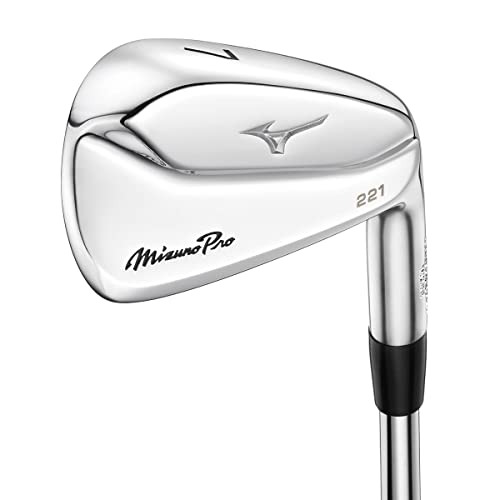 Overall, the Pro 221 are the best Mizuno irons in 2022. They suit better players with fast swing speeds who strike the ball consistently.

These irons aren’t for you if you’re not a good ball striker. That’s because they offer limited forgiveness on off-center hits. You’ll immediately feel the mishit and notice a loss in distance.

However, you’ll love the feel these irons offer if you’re a consistent ball striker. When struck in the middle, they feel amazing.

Hit properly, these irons give the ball a true, penetrating flight. The spin isn’t affected, though, so you’ll still be able to stop the ball on the green with approach shots.

Better players need workability in irons. They must be able to shape shots at will to attack pins tucked away in various positions.

And the Pro 221 are exceptional in this department. Not only can you work the ball left or right with them, but you can change the ball flight when you need to.

The versatility these irons offer is second to none.

The Mizuno Pro 223 irons offer a nice blend of feel, forgiveness, and distance. It offers you more forgiveness than the Pro 221 while keeping a compact look at address. 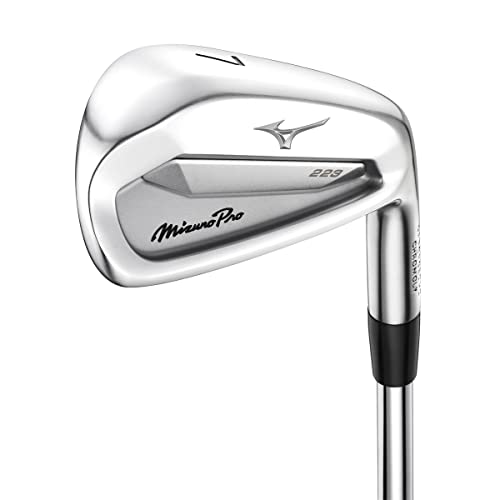 The Mizuno Pro 223 irons are our runner-up for best Mizuno irons. These irons will suit low, single-digit handicappers who still want some level of forgiveness and a boost in distance.

With these irons, you still get the exceptional feel you’d expect from Mizuno irons. However, that’s blended with more forgiveness and distance compared to the Pro 221.

Don’t get us wrong. This isn’t a distance iron that’s packed with forgiveness. But it’s very playable considering its compact design.

Low handicappers will still get excellent workability from the Pro 223. The ball responds beautifully off the clubface when you perform some shot-shaping magic.

The only letdown is that the improvement over the previous model is minimal.

Mizuno Pro 225 irons give you a soft, solid, and consistent feel. A 28.5g Tungsten weight sits low and deep for improved launch with long and mid- irons. 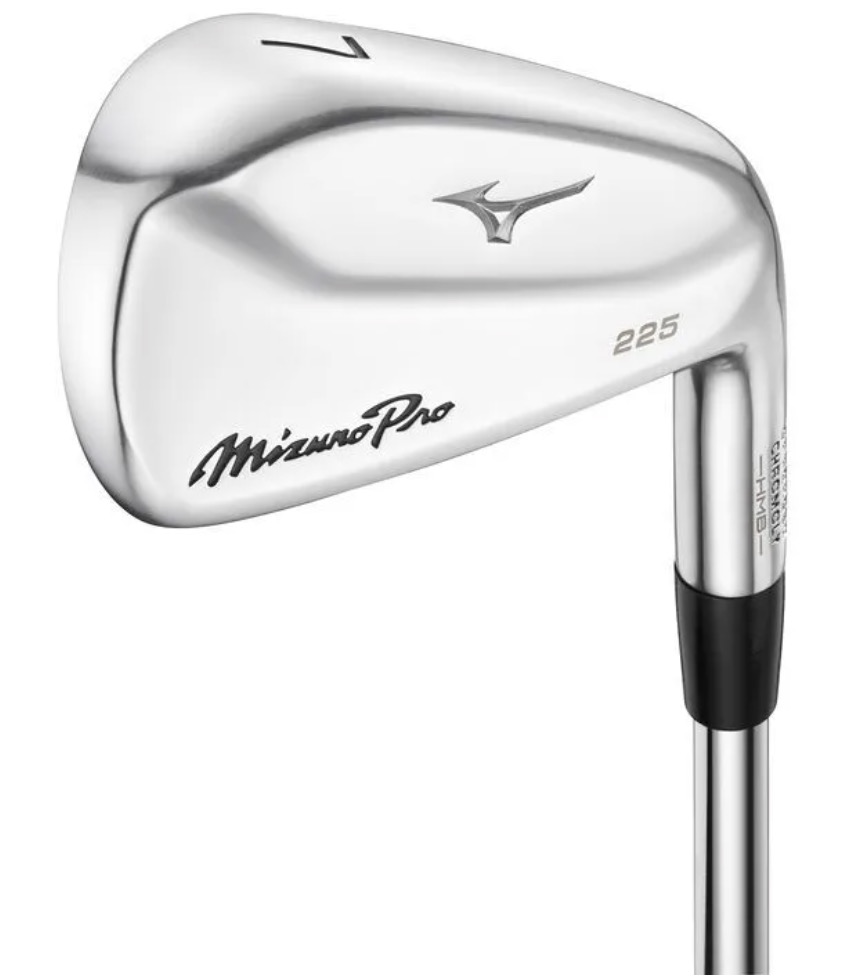 The Pro 225 irons are the best Mizuno irons for speed. They’re a good fit for decent players who want to gain speed – think single-digit to low double-digit handicappers.

When you hit these irons, they feel hot off the face. Although they’re a sleek, players-looking iron, they still pack a punch in the distance department.

They look like muscle-back irons, but they actually have a hollow-head construction. The ball springs off the clubface, giving you that speed and distance. So, don’t let the compact look of the Pro 225 fool you.

With a Tungsten weight sitting low and deep, you get a high launch with the long and mid irons. That’s helpful if you need that little help getting an optimal ball flight.

Compared with the other Pro models already reviewed, the 225 irons are much more forgiving. If you’re a decent player who isn’t the best ball striker, that’ll appeal to you.

Mizuno JPX921 Hot Metal irons are built for distance. These irons are an excellent choice if you need more distance in your iron game. 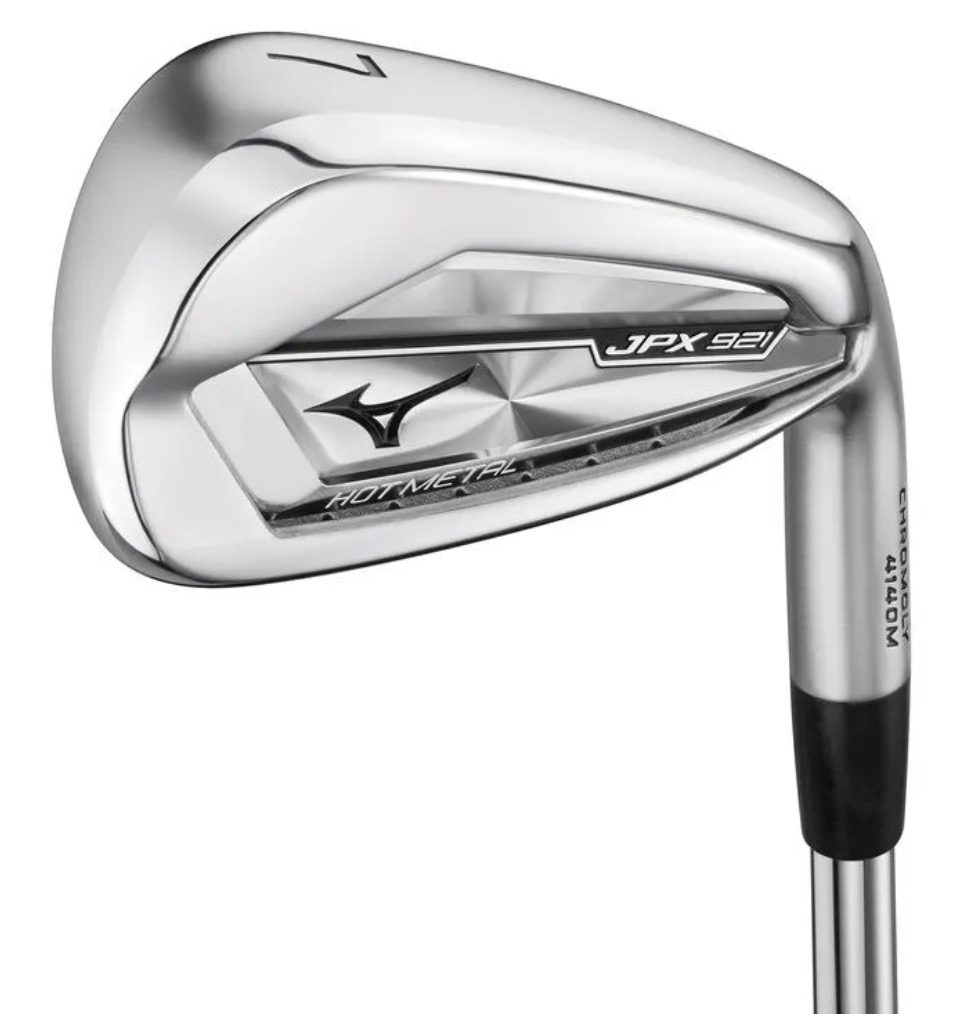 The JPX921 Hot Metal irons are the distance option on our list. These irons will suit higher handicappers who need distance and more forgiveness.

You can get fast ball speeds with these irons, even if your swing speed isn’t the fastest. The face is thinner across the center point, while the variable sole thickness generates more face flex.

These design characteristics translate to increased ball speeds. And the higher the ball speed, the more distance you’ll get.

Distance isn’t the only thing these irons have going for them, however. They also give you excellent forgiveness.

Extreme perimeter weighting and toe bias give you more consistency on off-center strikes. Therefore, you won’t see a drop-off in performance even when you don’t catch the sweet spot.

Mizuno JPX921 Forged irons get the fastest ball speeds Mizuno has ever produced with fully-forged irons. Combine that with the Stability Frame, and you get long and forgiving irons. 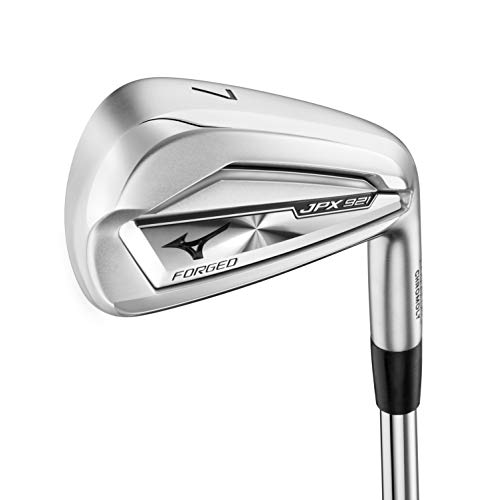 The JPX921 Forged irons are the best Mizuno irons for mid-handicappers. They give players of this ability the perfect combination of distance and forgiveness.

You’ll notice fast ball speeds with these irons, the fastest of any Mizuno forged iron. Admittedly, the ball speed isn’t quite up there with the Hot Metal model, but it’s not far off.

That’s good news for players who want distance packaged in a sleeker design. And the JPX921 Forged irons deliver that.

They have a more compact look than their bulkier counterparts. And the reduced offset is a nice touch.

These irons are a great option if you’re a mid-handicapper who likes a compact clubhead. You won’t need to sacrifice distance and forgiveness to get the look you desire.

What to Consider When Buying Mizuno Irons

A beautiful feel is one of the big bonuses of playing the best Mizuno irons. However, not all Mizuno irons are created equally when it comes to feel.

The Pro Series has a better feel than the JPX series. However, that’s not to say that the JPX irons don’t feel great, because they do.

Better players who are more concerned with feel will get the most out of the Pro Series, though. They just feel so good when you hit them out of the sweet spot.

If you’re testing out Mizuno irons, try to tune into the feel. The feedback you get from the clubface is awesome.

When buying the best Mizuno irons, you should consider their workability. Again, the Pro Series is more geared towards workability than the JPX Series.

If you want the option to hit draws or fades out on the course, an option from the Pro Series is the best choice. They help you shape shots the way you want to.

Also, these irons allow you to alter the trajectory at will – if you have the ability. That comes in handy when you’re playing on a windy day.

Keeping the ball low in those conditions can help you keep your scores low.

The launch on offer is another factor to consider in the best Mizuno irons. That’s usually more of a concern when you move up the handicap scale, and swing speed starts to get slower.

If you need Mizuno irons to help you launch the ball higher, you’ll want to consider the JPX Series. However, good players who need help launching the ball could go for the Pro 225 irons.

But players who are really struggling to launch the ball with their irons should consider the JPX921 Hot Metal. These give you the most help when it comes to getting the ball airborne.

Most golfers should consider distance when buying the best Mizuno irons. Unfortunately, we’re not all blessed with the power to hit it long.

It’s a good thing that some Mizuno irons are packed with technology to help us out then. We can add some extra yards and feel good about ourselves in the process.

But adding distance isn’t just about stroking your ego. If you can get the ball traveling a few extra yards, it can make the game that bit easier.

Depending on your ability, a set of irons in the JPX Series is your best bet for distance.

When buying Mizuno irons, you should consider forgiveness. This will be more important to some than others.

The average golfer will want forgiving irons. You’re likely not the best ball striker if you fall into that category, so you need the forgiveness.

The added forgiveness means your inconsistency won’t cost you too dearly. You won’t see a significant drop-off in distance on off-center strikes, for instance.

That could be the difference between finding the green or splashing into the water.

Of course, the looks of irons play a bigger part for some compared to others. Even if they get fantastic performance from irons, some players won’t use them if they don’t like how they look.

If looks are that important to you, they must be a consideration.

The price is also something to consider when buying Mizuno irons. The options on our list come at different price points.

Also, Mizuno irons are dearer than other options on the market. But you know you’re getting a high-quality product when you buy Mizuno irons.

The company is one of the best iron makers in golf for a reason. It does things the right way and uses the best materials.

So, although the price might be higher than some other manufacturers, Mizuno irons are built to last. You can get many years of golf out of these irons.

That’s also something to think about when you’re considering the price.

Overall, the Pro 221 are the best Mizuno irons in 2022. These irons combine a sublime feel with superb workability.

Better players with fast swing speeds who strike the ball consistently will get the most out of these irons. With a sleek look, they look amazing at address and in the bag.

You’ll notice a penetrating ball flight when you hit these irons pure—the ball arrows towards the target, which is beautiful to watch.

Joe's been playing golf for 25 years, starting as a junior golfer in his early teens. He loves getting out on the links with his dad and friends -- whether an early weekend foursome or his weekday, afternoon league.